Every Thursday morning at 7am I join Tom Egelhoff on his local talk radio show to discuss financial events, money tips, and field live questions (1450am /kmmsam.com). Recently, I was asked by a caller what I believe the most common mistake investors make in their retirement portfolios is? After disclaiming all responsibility for my advice and it’s possible outcome, I replied that I believe many people are not taking enough risk in their retirement portfolios. I usually want people to consider their retirement accounts as their highest risk asset, owning more stock and less ‘other stuff’ in their IRA’s, 401k’s and other qualified assets. 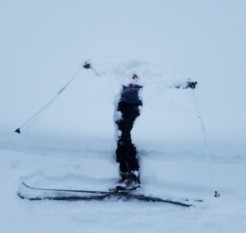 My reason is that retirement money is designed for long-term growth by the tax advantages it receives. By taking more risk, over the long term there should be more growth, and therefore the tax deferral has a greater benefit. Such risk should be offset by other strategies (like holding cash and paying down debt) to ensure that your overall financial condition it true to your tolerance. But, two things are clear: average lifespans are extending; and if you avoid risk, you will usually also avoid reward.

So far in 2020, the outlook is calling for continued gains in stock and real estate investments despite the backdrop of coronavirus, trade ‘bickerments’, and an election that is sure to offend everyone somehow. My personal view is that we are currently beyond fair value, but not yet at ludicrous values. If we can help you or someone you care about, feel free to call. 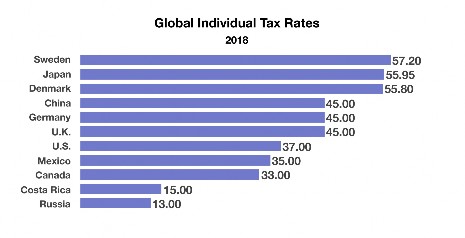 Scandinavian countries have historically maintained higher tax rates in order to subsidize the various social programs offered to its citizens. Sweden and Denmark both have tax rates for individual taxpayers in excess of 55%. Other countries not offering similar social programs such as Russia and Costa Rica, impose lower rates. Costa Rica has become a beacon for some people partially because of its climate and 15% tax rate. (Source: Tax Policy Center, OECD; https://stats.oecd.org

Workers are spending less time unemployed according to data compiled by the Department of Labor. The number of workers that are unemployed for a period of 27 weeks or more fell to 1,186,000 in December 2019.  The data reveals that workers are finding jobs quicker and that companies are hiring at a faster pace. 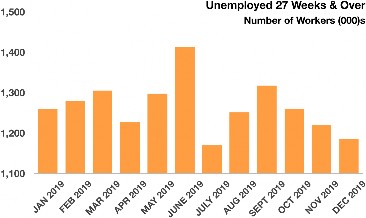 Unemployment time has been consistently decreasing since September 2019, a positive observation as noted by economists. A 50-year low for the unemployment rate has contributed to shortened unemployment periods for workers, as demand for skilled labor has gradually increased.
(Source: Bureau of Labor Statistics, U.S. Department of Labor, The Economics Daily

Retirement plan legislation passed by Congress effective 2020 includes changes affecting millions of American retirees. The Setting Every Community Up For Retirement Enhancement Act, known as the Secure Act, was signed into law by the president on December 20th.

A current rule that will remain the same is allowing a spouse to rollover their deceased spouse’s IRA to a spousal IRA and take Required Minimum Distributions (RMDs) based on their life expectancy. Inherited IRA rules will be modified by the newly imposed rules affecting non-spousal beneficiaries such as children and grandchildren, the most common types of inherited IRA beneficiaries, who will be required to distribute the entire balance within 10 years, rather than “stretching” the distributions out. A challenge for inherited IRA beneficiaries is the tax implication of accelerated distributions over a much shorter time period. Some beneficiaries may also run the risk of falling into a higher tax bracket, especially if they are working.

Small businesses are encouraged to set up plans for their employees by increasing the cap under which employees are automatically enrolled in a plan at 15% of wages. Part-time employees who work either 1,000 hours annually or have three consecutive years with 500 hours of service are eligible for a 401(k) plan. Annuities will now become an option for employees taking retirement distributions from their 401(k) plan, providing consistent income similar to how pension plans used to decades ago.

Our clients enjoy the feeling of having their financial lives kept in order. Freedom from worry comes from working with an experienced advisor that understands your entire financial life and is accessible and attentive to your needs. As a fiduciary, Mike is unable to receive commissions from financial products and free to make recommendations that are unbiased by Wall Street. With over a decade of experience caring for a small family of clients, our specialties are preserving wealth and generating sustainable income. Our average client net worth ranges from $3 to $12 Million. Go outside, we’ve got this.

Market Returns: All data is indicative of total return which includes capital gain/loss and reinvested dividends for noted period. Index data sources; MSCI, DJ-UBSCI, WTI, IDC, S&P. The information provided is believed to be reliable, but its accuracy or completeness is not warranted. This material is not intended as an offer or solicitation for the purchase or sale of any stock, bond, mutual fund, or any other financial instrument. The views and strategies discussed herein may not be appropriate and/or suitable for all investors. This material is meant solely for informational purposes, and is not intended to suffice as any type of accounting, legal, tax, or estate planning advice. Any and all forecasts mentioned are for illustrative purposes only and should not be interpreted as investment recommendations.