Unfortunately, that has all changed – one girl is at MSU, the other now has her driving license, and my wife works all the time managing a preschool (can you imagine how hard that is right now?). Thankfully, I’ve got a job I love and I’m once again coaching the middle school Cross Country team (Go Coyotes!). In this issue we talk a bit about the future of bonds, celebrate American consumerism, forecast a run on bacon, and worry about how our kids will be able to afford rent. Stay safe, and enjoy a wonderful Fall!

But first let’s talk about Facebook and Mental Health

Public companies sometimes sell products that are harmful to our health, cigarette makers for example. Owning shares of their companies can be profitable and investors can benefit off of people choosing to smoke. If an investor feels uncomfortable about this, they can ask their advisor to not invest in these types of companies. But more commonly, people allow regulated markets to perform in humanity’s best interest and then they may go on to donate money to cancer research or vote a certain way. Largely, this is how I’m reacting to Facebook’s recent congressional investigation about how it’s harming teen mental health. Social media can do real harm and it can also provide great benefits. I don’t like using or investing in social media the same way that I don’t like working in a giant new building in Bozeman: I want it to stop, but I don’t want to have to stop using it. Hopefully, Facebook will adapt and improve it’s impact on our teens and maybe even grow into something better. So long as it presents a fair long term return, we will include it in our investment options.

Bond Yields Starting To Feel Pressure – Fixed Income Update
The Federal Reserve announced that it anticipates alleviating bond buying possibly later this year, yet with no imminent interest rate increases for now. The Fed’s pull back in bond buying is known as tapering, when stimulus support starts to unwind.

Ironically, any pull back in bond buying is expected to lead to higher rates, an indirect consequence of tapering. Yields on Treasury bonds maturing from 2 to 30 years all saw slight increases, interpreted by economists as a shift up in the yield curve, meaning that economic expansion is possible and that inflationary pressures are looming.

Consumers Drive Economic Growth, Not Government – Consumer Expenditures
Each month the Department of Commerce releases its Gross Domestic Product (GDP) report. This report is the single most recognized indicator of how the economy is performing.

GDP is made up of private consumption, gross investment, government spending, and net exports. The single largest contributor of these components is consumer consumption, making nearly 70% of GDP. 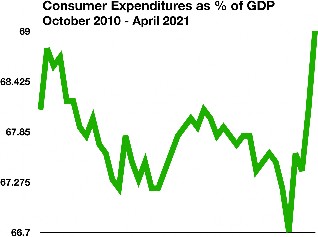 Historical data provided by the Bureau of Labor Statistics shows that U.S. economic growth has steadily become more reliant on consumer expenditures. Consumer expenditures as a percentage of GDP have risen to their highest levels over the past three years since the end of World War II. The importance of how much we consume as consumers each and every day has become that much more significant.Additional data from the Fed shows that consumers have also adjusted their spending behaviors, relying less on credit and more on government stimulus payments to spend, vastly different from the peak of easy credit seen in 2004-2006. (Sources: BLS, Fed)

Why Bacon Is Getting More Expensive – Food Inflation

As the pandemic shuttered businesses over the past year and kept workers home, processing plants that produce meat products, such as bacon, weren’t able to fulfill demand. Grains and other feed products increased in costs concurrently, adding pressure for producers to increase prices. 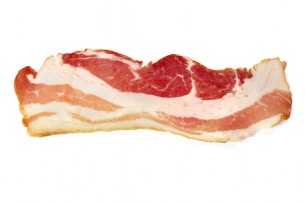 A California proposition passed in 2018, known as the Farm Confinement Proposition, will start to require that pig farmers maintain more breeding space for animals. Producers are already making arrangements for the additional required real estate and plan to pass along those expenses to consumers. Pig farmers in states other than California are affected since pork products won’t be allowed for sale in California unless the new animal confinement rules are met.

Increasing labor costs are also a concern as meat producers that lost workers last year to the pandemic, still haven’t found replacements, with some having to increase wages in order to attract new hires.

Millions Spend Nearly Half Of Income On Rent – Housing Update

As home prices have soared over the past year and housing inventories fallen, more and more families are being forced to rent rather than own. As the demand for rentals has been increasing, the level of home ownership has been falling. Some attribute this dynamic to a low inventory of homes on the market, while others blame speculation contributing to rapidly rising home prices.

A lack of available houses along with the increased demand for rentals has propelled rental costs upward. The number of families dedicating almost half of their income to rent was approximately 10 million people in 2020, according to the annual State of the Nation’s Housing Report from the Joint Center for Housing Studies.

As rental prices have been rising faster than wages, losing such a large portion of a paycheck to cover housing means cutting back on essentials such as food, clothing and health care. This can be draining on young families trying to save for a down payment on a home purchase and not knowing if they’d be able to get approved or not.

More affluent renters are staying in the rental market longer and driving up the demand for housing. Traditionally, the wealthy move on to become homeowners, but tight inventory in the housing market is keeping them in rentals longer.

The report found that most new apartment construction has focused on the higher income earners. Those earning $75,000 and over have contributed the most to rental growth over the past few years.

The Bozeman CPA Symposium is on for November 10th, 2021 at the Gran Tree! If you are an accounting professional, email me to reserve your spot today. As always, we have a great lineup of engaging speakers (CPE available) and a happy hour to boot!

We are once again supporting the 7th annual Run For Your Life 5k on October 30th. Come run in a (chafe free) costume through haunted forests! https://www.bozemanhelpcenter.org/run-for-your-life.html

And for everyone– Among other great traditions that have returned, the monthly Bozeman 5k Brew Runs are back and, well, running! Check out the schedule and register at https:// www.bozemanrunningcompany.com/ 5k-brew-run-series.html

Our clients enjoy the feeling of having their financial lives kept in order. Freedom from worry comes from working with an experienced advisor that understands your entire financial life and is accessible and attentive to your needs. As a fiduciary, Mike is unable to receive commissions from financial products and free to make recommendations that are unbiased by Wall Street. With over a decade of experience caring for a small family of clients, our specialties are preserving wealth and generating sustainable income. Our average client net worth ranges from $5 to $30 Million. Go outside, we’ve got this.

Market Returns: All data is indicative of total return which includes capital gain/loss and reinvested dividends for noted period. Index data sources; MSCI, DJ-UBSCI, WTI, IDC, S&P. The information provided is believed to be reliable, but its accuracy or completeness is not warranted. This material is not intended as an offer or solicitation for the purchase or sale of any stock, bond, mutual fund, or any other financial instrument. The views and strategies discussed herein may not be appropriate and/or suitable for all investors. This material is meant solely for informational purposes, and is not intended to suffice as any type of accounting, legal, tax, or estate planning advice. Any and all forecasts mentioned are for illustrative purposes only and should not be interpreted as investment recommendations.